The Power in the Center

BERLIN (Own report) - Using the secessionist conflict in Catalonia as a backdrop, the website of the German weekly Die Zeit published a fiery appeal for dismembering Europe's nation-states. For quite some time, the author, Ulrike Guérot, has been promoting the "disappearance of the nation-state" in Europe. The nation-state should be replaced by regions with their "own respective identities" that could be "ethnically" defined. As examples, Guérot lists regions with strong separatist tendencies such as Flanders and Tyrol. The author sees herself upholding the tradition of the "European Federalists" of the early post-war period, who - under the guidance of western intelligence services - drew up plans for establishing of a European economic space with free circulation of commodities as a bulwark against the East European socialist countries. Wolfgang Schäuble, as President of the Association of European Border Regions (AEBR) in the early 1980, was also promoting regionalist plans. Inspired by former Nazi functionaries, the AEBR criticized the "nation-state's barrier effect" of borders in the interests of large corporations. Current economic maps indicate which areas in the EU would form the continent's most powerful block if regionalization should take effect: south and central Germany as well as its bordering regions from Flanders to Northern Italy.

From the CDU to the Greens

Yesterday, the website of the German weekly, Die Zeit, published a fiery appeal to dismember Europe's nation-states, authored by the political scientist Ulrike Guérot. Guérot had been employed by CDU parliamentarian Karl Lamers in the first half of the 1990s and participated in formulating the Schäuble/Lamers paper, propagating the establishment of a core Europe. She subsequently became collaborator for the EU Commission President at the time, Jacques Delors, and an expert of several think tanks (German Council on Foreign Relations, German Marshall Fund, and the European Council on Foreign Relations). In 2014, she founded a European Democracy Lab at the European School of Governance. Once member of the CDU; today, she is politically close to the Greens.[1]

Since some time, Guérot has been peddling an allegedly new political concept to the German public, based on the dismemberment of Europe's nation-states. According to her, "the nation-state will disappear" [2] and will be replaced by "50 to 60" regions in Europe, with "their own respective identity."[3] She is referring to the concept of "ethnic regions,"[4] i.e. an ethnically defined community of shared origins. As Guérot writes "ethnic region and statehood are not congruent" for example in Ireland or Cyprus; Flanders, Venetia and Tyrol are further examples. In Flanders and Venetia, respectively more prosperous regions, defining themselves linguistic-ethnic ("Netherlander" or "Venetian") are dissociating themselves from poorer regions of the country, whereas the German speaking construct "Tyrole" encompasses areas of Austria and Northern Italy. According to Guérot, Catalonia is also one of the regions to be liberated from its constraints under the nation-state. The Catalan movement currently pushing for secession is in fact largely defining itself ethnically. The autonomous movement has been closely cooperating with French citizens, who live outside the Spanish region of Catalonia, but also consider themselves "ethnic Catalans." At their rallies one can hear "Neither France nor Spain! Only one country, Catalonia!"[5] Last weekend the spokesperson of the left CUP party in Spanish Catalonia complained that Spaniards from outside Catalonia had come to Barcelona to participate in a demonstration. To demonstrate in Catalonia as a "Spaniard" corresponds to a "colonial logic."[6]

Europe of the Regions

According to Guérot, only a "European Republic," wherein "the regions assume the role of the central constitutional actors," can save an EU shaken by national conflicts.[7] For example, the regions should constitute "a second chamber" in the European Parliament - "a European Senate." Guérot has repeatedly said that political competence must be redistributed between the EU and its regions. According to this concept, a center of power will be set up in Brussels, in control of foreign and military policy, while the regions - for example, in charge of commercial taxes - would financially maintain independent latitude. Of course, the latter would depend on the economic power of the respective region. Besides its ethnic constitution, a "Europe of the Regions" would lead to a complete disenfranchisement of its smallest units. Guérot criticizes the fact that "the EU is full of large regions (such as North Rhine-Westphalia) which are not permitted to participate in EU decision making, while on the other hand, small countries (such as Luxembourg or Malta) are." That must change. For example, rather than having one vote out of 28 in the European Council, Malta would only have one out of "50 or 60" votes in the "European Senate." It would not be able to counter any measures proposed by the EU's economically predominating centers.

Guérot's concept has precursors, which had been promoted, on the one hand, by intelligence agency circles of the post-war period and by interested business circles, on the other, serving however, entirely different interests under cover of promoting an alleged regional democracy. Guérot says herself that her model is based on the "European Federalists," particularly the Swiss Denis de Rougement. Since the mid-1940s, the "European federalists" sought to found a "United States of Europe," as a unified economic realm - serving as a bulwark against the socialist countries, in the process of forming. It was also seen as a defense against the idea of abandoning the previous economic approach, which, at the time, was also rather popular in Western Europe. This is why the federalists had initially been supported and controlled by the CIA predecessor, the Office of Strategic Services (OSS) and its director, Alan Dulles, residing in Bern, and later by the CIA itself.[8] Rougement, an OSS-affiliate and professed federalist, complained in a 1948 "Message to the Europeans," that "Europe" was "barricaded behind borders impeding the circulation of its commodities," and because of this, is threatened with economic ruin. On the other hand, "united," it could, already "tomorrow, build the greatest political entity and the largest economic unit of our times." From 1952 - 1966, Rougemont continued his activities also as president of the CIA-financed "Congress for Cultural Freedom."

Wolfgang Schäuble has also promoted regionalist concepts. Guérot had been in contact with him in 1994 during work on the Schäuble-Lamers paper. In 1979, Schäuble became president of the Association of European Border Regions (AEBR), an organization with the objective of downgrading the significance of borders in Europe. Business interests played an important role, which is why the AEBR could find reliable supporters in industry. A "European Charter on Border and Cross-Border Regions," passed by the AEBR in 1981, stipulated that the "elimination of economic and infrastructural barriers" must urgently be pursued. For example, the "expansion and construction of coordinated, combined cross-border freight transport terminals" is necessary to "close current gaps in cross-border traffic." In addition, the expansion of cross-border energy networks must be promoted. This is being overblown with allegations of Europe having emerged from a "patchwork of historical landscapes," with borders creating "scars" on Europe's regions, and leading to the population's "loss of identity." The current "nation-state's barrier effect" must be reduced - if not abolished, according to the paper drawn up under Schäuble's AEBR presidency.[9]

Former Nazi functionaries were actively participating both on the AEBR's committees and in the immediate entourage of its planning of the "regionalization" of the border regions, including Gerd Jans, the former member of the Waffen SS in the Netherlands, Konrad Meyer, responsible for the Nazi's "Generalplan Ost," Hermann Josef Abs, of the Deutsche Bank, as well as Alfred Toepfer, described by the publicist Hans-Rüdiger Minow as "infamous for his border subversion of France's Alsace." In an extensive study, Minow describes the continuities of the Nazi's concepts.[10]

Guérot ultimately argues in favor of her regionalization concepts, using the allegation that through the removal of nation-states, "Germany's supremacy ... can be overcome." The opposite is the case. Economic maps by the EU's Eurostat statistics administration show the regions where Europe's wealth and, therefore, Europe's economic power is concentrated, a block with its centers in southern and central Germany, to the west, in Flanders and spreading to segments of the Netherlands, and to the South to parts of Austria and Northern Italy and in various separate regions of Western and Northern Europe. A number of these regions maintain close relations to Germany, or to the German regions. (german-foreign-policy.com reported.[11]) This clearly German-dominated block would hardly have any difficulty controlling a "Europe of the Regions."

(Here, german-foreign-policy.com documents two Eurostat economic maps. The upper map shows the brut GDP per capita, according to the Purchasing Power Parity (PPP), while the lower map depicts the primary household incomes. The colors for Germany's south indicate the highest values, while the colors for the furthest southwestern and eastern EU indicate the lowest. Source: Eurostat.)

For more information on this subject see: The Economy of Secession (II). 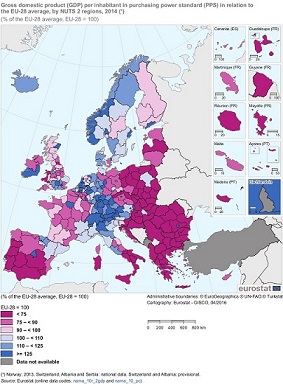 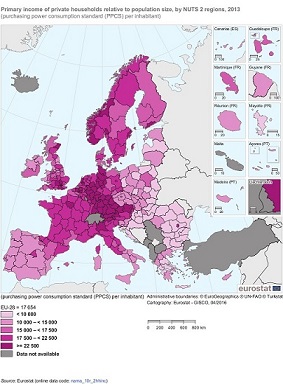