SOFIA/BERLIN (Own report) - The CDU-affiliated Konrad Adenauer Foundation (KAS) is counseling Bulgaria's coalition government of conservative and several extreme right wing parties preparing their country's EU Council Presidency. Sofia's coalition government, headed by a partner party of the KAS, includes a party, whose chairperson once wrote that "a gang of Jews had ruined orthodoxy." The chair of another party in the Bulgarian government coalition called Roma "human-like creatures that have become beasts." He is the current deputy prime minister. The Bulgarian defense minister would like to dispatch "highly specialized combat troops" to the Bulgarian-Turkish border and "defend" the EU's external borders against refugees "with armed force." January 1, 2018, the Bulgarian government will assume the EU Council Presidency. Hardly prepared for this task, the KAS is counseling the government. Hans-Gert Pöttering, former President of the European Parliament, praised Bulgaria's contribution to the "fight against illegal migration."

"Without a Clear Line, Corrupt"

The CDU-affiliated Konrad Adenauer Foundation (KAS) began its efforts to help prepare Bulgaria for the EU Council Presidency already shortly after the official formation of Sofia's government, May 4. This must not only be seen in the context of Berlin's usual efforts to influence EU policy, but also because the Bulgarian government's preparation for the presidency is in a deplorable condition. Last week, the FDP-affiliated Friedrich Naumann Foundation's project manager for Southeast Europe noted that, regarding the issues Sofia would like to focus on during its presidency, everything is still very "vague;" "various priorities without a clear thread" are mentioned. They cannot even formulate their "own ... projects." In relationship to the "renovation of the central meeting place, ... serious accusations have been raised concerning embezzlement of the means for this prestigious project and corruption in contract allocations." For example, the plaza in front of Sofia's National Palace of Culture is to be renovated for five million leva (nearly 2.5 million euros), in spite of the fact that it was just renovated last year for several million leva. The website for the ministry, established for the EU Council Presidency, could "symbolize the state of preparation." "It is exclusively in the Bulgarian language and only partially functional."[1]

The KAS is therefore intensifying its efforts. The party of the Bulgarian Prime Minster Boyko Borisov, GERB ("Citizens for European Development of Bulgaria"), is a member of the conservative European People's Party (EPP) in which the German conservative parties CDU/CSU hold a strong position. This explains the KAS's involvement. KAS is also providing direct support to GERB's women and youth organizations. Leading KAS representatives have already met twice - May 31 and July 18, - with Bulgaria's Foreign Minister Ekaterina Zaharieva to discuss Sofia's EU Council Presidency. Prime Minister Borisov visited the Foundation's Deputy Secretary General, Gerhard Wahlers on June 7 for the same purpose. September 11, Parliamentary State Secretary at Germany's Ministry of the Interior, Ole Schröder (CDU), visited Sofia to participate in a conference of lectures and discussions aimed at celebrating Bulgaria's ten-year EU membership. He lectured on the "special challenges facing the EU Council Presidency 2018." To help prepare for the Council Presidency, Prime Minister Borisov also convened a six-member advisory board, including former Bulgarian President Rosen Plevneliev (2012 to 2017), former Prime Minister Simeon Sakskoburggotski (2001 to 2005) and particularly the KAS Chairman Hans-Gert Pöttering.[2] Pöttering was President of the European Parliament from 2007 to 2009.

"Bulgaria Above Everything Else!"

Berlin and Brussels are also worried that, with Bulgaria's government, extreme right wing politicians may also preside in the EU Council Presidency. Following the recent March 26, parliamentary elections, Borisov, the winner of the elections (his GERB with 32.7 percent), did not begin negotiations for a government coalition with the Bulgarian Socialist Party (27.2 percent) or with the Movement for Rights and Freedoms (9 percent) representing the Turkish-speaking minority, but rather with the United Patriots (9.1 percent). The United Patriots is an alliance of three extreme right-wing parties.[3] The coalition negotiations were carried out under the motto "Bulgaria above everything else!" and was ultimately crowned with success. Volen Siderov, the head of one of the three parties ("Ataka"), forming the United Patriots, once called on the Roma minority (Gypsies) to "behave themselves," if they did not want to be deported to India. In a book, he wrote that "a gang of Jews" have "ruined the orthodoxy."[4] Valeri Simeonov, Chair of a second party in the United Patriots, the "National Front for the Salvation of Bulgaria" (NFSB), referred to Roma as "human-like creatures, who have become beasts," and said that their children were playing "in the streets with pigs."[5] Since May 4, Simeonov has been in office as the Vice Prime Minister, in charge of the economy and demography, as well as being Bulgaria's Commissioner for Integration.

With a Nazi Salute

Twice, photographs have already emerged showing high-ranking officials of Bulgaria's government, elected to office in May, in poses honoring the Nazis. May 17, Pavel Tenev, Minister of Regional Development, at the time, was forced to resign, after publication of a photo, showing him with his right arm extended in a Nazi salute, standing in front of a wax figure of a Nazi officer in Paris' Musée Grévin. May 19, another photo was published on the internet, showing the freshly appointed department director in the Ministry of Defense, Ivo Antonov, also giving the Nazi salute in front of a Second World War tank of the Wehrmacht. (On the right, german-foreign-policy.com documents a segment of this photo.) His most senior employer, Defense Minister, Krasimir Karakachanov, Chair of the IMRO-Bulgarian National Movement, refused to fire him.[6]

One of the Bulgarian government's few recognizable political priorities is warding off refugees. Prime Minister Borisov expressed his gratitude to the militia-like citizens' defense units, who, already since 2014, have been patrolling - some under heavy arms - the Turkish-Bulgarian border to keep undesirable migrants at bay. In April 2016, one of these citizens' defense units, the "Organization for the Protection of the Bulgarian Border," received an official award from the Bulgarian Border Police. In August, Defense Minister Karakachanov declared, he would "reinforce the military presence" along the Bulgarian-Turkish borders. "Highly specialized combat units will be among them."[7] "Night-vision video cameras and drones" will be used, "to better be able to monitor the migrants' movements and intervene in time." The minister also wants to have "NATO and EU troops intervene" in Greece and Italy. "The external borders of the European Union must be defended, if necessary, with armed force," he demands.

Bulgaria "is already contributing a great deal to the European Union, for example, by fighting illegal migration," declared Hans-Gert Pöttering, KAS Chair, which is advising the Bulgarian government in its preparations to assume the EU Council Presidency. Commenting on his appointment to the advisory board, that met last Friday in Sofia, Pöttering said it was "also a sign of recognition for the work of the Konrad Adenauer Foundation, which has been active in Bulgaria since 1994, always advocating that the country take the European course."[8] 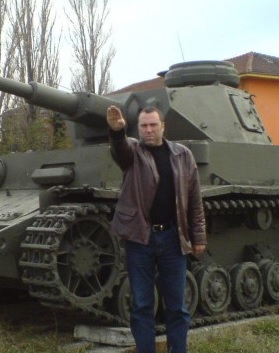