BERLIN (Own report) - Foreign policy makers in the German Bundestag are calling for the deployment of the Bundeswehr against the terrorist organization "Islamic State" (IS) in Iraq. The CDU/CSU parliamentary group's foreign policy spokesperson, Philipp Mißfelder, does "not rule out" German participation in air strikes against IS. A colleague of his parliamentary group could imagine German military deployment "within the framework of surveillance flights." A parliamentarian of the Green Party also shows sympathy toward the idea of a Bundeswehr mission against IS. A possible intervention of German soldiers would supplement German arms deliveries to Kurdish troops in Iraq and the establishment in Erbil of a northern Iraq military nucleus, which had been completed in late August. According to experts, "the post-colonial transition period" in the Middle East is "coming to an end, but the contours of a new Arab order are not yet in sight." The disintegration process will "most likely take long" and probably leave a Syria reduced to the western part of its current territory, an Iraq, broken into three parts or a Libya shattered into six or more segments. The war against IS opens another round of the Western struggle to reorganize the region.

Several foreign policy makers in the Bundestag are calling for the deployment of the Bundeswehr in the fight against the "Islamic State" (IS) terrorist organization. The CDU/CSU parliamentary group's foreign policy spokesperson, Philipp Mißfelder, has declared, he does "not rule out" German participation in "air strikes" and can conceive of the Bundeswehr training Iraqi soldiers. Combat missions by ground troops, on the other hand, would be out of the question. Karl-Georg Wellmann, Mißfelder's CDU/CSU parliamentary group colleague, is also in favor of German participation in the war and explicitly calls for the "deployment of German soldiers in aerial reconnaissance units within the framework of surveillance flights." He is referring to AWACS aircraft, such as those stationed in North Rhine-Westphalia's Geilenkirchen. Omid Nouripour, the Green parliamentary group's foreign policy expert reiterated his call, made last August, for the deployment of German soldiers.[1] Nouripour proposes "to air-drop supplies." "The Lufthansa cannot do this, but the Bundeswehr can."[2]

Presence of a Military Nucleus

The Bundeswehr had begun to establish a military nucleus in northern Iraq, already before the call was raised to participate in the war on IS. Since August 27th, a "six-soldier military liaison team" has been set up with the German General Consulate in Erbil northern Iraq. The soldiers are under the foreign ministry's authority and officially have "the task of helping to coordinate on the ground additional German aid" - i.e. to organize "the transfer of aid deliveries and military equipment."[3] Their role, however, has already been significantly expanded. As one officer from Erbil explained, they also provide training in how to use the equipment (radios and assault rifles)[4] and are in close contact with Iraqi Kurdish troops and the military administration in Erbil. They have "a good insight in the so-called Peshmerga Ministry," which one must "visualize as a defense ministry of the Autonomous Region of Kurdistan," the officer said.[5] "Through the daily briefings in the Peshmerga Ministry," they also follow, with the utmost attention, the ground war against IS, according to a report.[6]

German arms deliveries to Iraqi Kurdish troops, organized by German soldiers in Erbil have already begun. The deliveries primarily transit via the Leipzig/Halle airport, which has already served as transit station for US soldiers heading to the war in Iraq.[7] The Ukrainian Russian joint venture "Ruslan Salis" is also engaged in the transport. The activities of "Ruslan Salis," which has effected EU and NATO military transport flights since 2006, are not affected by the conflict with Russia.[8] Because of the volume of the arms export, German government advisors have begun demanding a full debate on Middle East policy. (german-foreign-policy.com documents here the delivery schedules.) It is conceivable that German weapons are contributing "to altering the region's balance of forces" and this "should, at least, be discussed," declared Markus Kaim from the "Security Policy Research Group" of the German Institute for International and Security Affairs (SWP): We should clarify "our concepts of the desired regional political organization."[9]

Experts, in fact, are expecting wide-ranging upheavals all across the Middle East. "The Arab World finds itself in the deepest crisis since the Mongols invasion in the 13th Century and the destruction of Baghdad in 1258," writes the editor of the Frankfurter Allgemeine Zeitung (FAZ) and renowned Middle East expert in the current issue of the periodical of the German Council on Foreign Relations (DGAP) "Internationale Politik." With the disintegration of nations and the cancelation of borders in large portions of the Arab World, the "post-colonial transitional era of the Middle East is drawing to an end, but the contours of a new Arab order are not yet in sight." The current upheavals, which have "unleashed locally operating centrifugal forces," will, "persist, in all probability, for quite a while." Hermann explains how various alternative structures - religious associations, traditional tribal or local warlords - in Iraq, in Syria or in Libya are filling spaces left by the destroyed state structures.[10] It is astonishing that this author manages to attribute the total collapse of state structures solely to domestic tensions within the countries involved and avoid mentioning external factors ranging from western cooperation with local repressive elites, or the economic plunder, as well as the wars of aggression, particularly against Iraq and Libya, but also western incitement of the Syrian war. This furnishes the foreign policy establishment justifications that distract from western responsibility for the regional situation.

Hermann expects that the "wars and shifting alliances ... will produce a new political map." Possibly, " Iraq may be broken up into three new countries - a Shiite, a Kurdish, and a Sunni - which could extend into what is today Syria." The latter is referring to the territory currently more or less under the control of IS. In Syria, "the current republic will be left with a stretch of territory along the axis Damascus - Aleppo and the Mediterranean coastline." "The Kurds" will get their "autonomy," while eventually "a Sunni rebel-held territory, south of Damascus," could become permanent. "Libya cannot be maintained within its current borders," writes Hermann, and Yemen also, "will break up into at least four parts." "Why shouldn't there be three Iraqs, if the one Iraq is non-functional?" asked the author. "Why shouldn't there be six or more Libyas, when a single Libya cannot be held together?"[11]

Plans to Break Up the Middle East

In 2006, ultra-rightwing military circles elaborated and proposed plans for breaking up the Middle East.[12] These were republished by a publicist, associated with the

state-financed "United States Institute of Peace" shortly after the US government announced it would not attack Syria. (german-foreign-policy.com reported.[13]) (Image: Excerpt from the NY Times, September 28, 2013.)

The struggle against the IS terrorist organization "will take time" [14] predicted the foreign policy speaker of the CDU/CSU parliamentary group, Philipp Mißfelder. Actually, there are indications that the West seeks to use this fight to impose an "order" on the carcass left behind by the disintegration that it caused. This will - at least in rudimentary outlines - function to further its interests. 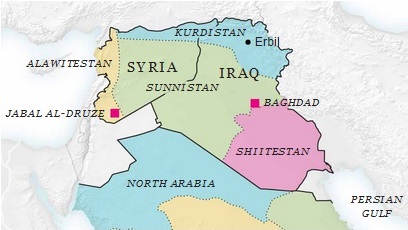