KIEV/BERLIN (Own report) - The raids on TV editorial boards by parliamentarians in the new Ukrainian government, which Germany helped bring to power, is provoking massive protests. Tuesday evening, Svoboda Party MPs stormed the office of the acting President of the National Television Co. of Ukraine (NTU) and forced him to resign with physical blows and verbal insults. A similar incident took place the day before in Chernihiv. Dozens of journalists in Kiev and the OSCE Representative on Freedom of the Media have harshly criticized these attacks, which are in line with Svoboda's electoral program promising to revoke the licenses of all media "spreading anti-Ukrainian propaganda." Svoboda's party program calls also for making the day of the founding of the Ukrainian Insurgent Army (UPA) a national holiday. The UPA had participated in the massacres of Jewish Ukrainians and tens of thousands of Poles - according to estimates, up to 100.000 people. The German Foreign Minister has lent this party international social respectability and German media is characterizing Svoboda not as "fascist," but merely as "nationalist." A leading German daily claims that the leader, Oleh Tiahnybok, has led his party "out of the right-wing quagmire."

The raid on the National Television Co. of Ukraine (NTU) carried out by a group of Svoboda parliamentarians and thugs, has provoked new protests against the new Ukrainian government. Under the leadership of MP Ihor Miroshnychenko, the Svoboda activists forced their way into NTU President Oleksandr Panteleymonov's office, accusing him of serving Russian propaganda interests because he had broadcast excerpts of the speech, Russian President Putin had held that day. They physically assaulted him and forced him to resign. Miroshnychenko is the Deputy Chair of the parliamentary Committee on Freedom of Speech and Information. A video of the attack can be seen on the internet.[1]

This has not been the only such incident. According to the OSCE Representative on Freedom of the Media, already on Monday, a group of unnamed individuals stormed the national television office in the Chernigov region, forcing its director, Arkadiy Bilibayev, to resign.[2] The "Right Sector's" militia occupied the TV station "Tonis" and suggested "editorial cooperation."[3]

The attack on NTU Director in Kiev is a "particularly serious incident," also because it was perpetrated by members of the freedom of speech and information committee of the Parliament. Svoboda leader Oleh Tiahnybok has now officially dissociated himself from the attack, declaring that his party must "understand" that it no longer is in the opposition and therefore, should use "other methods." Tiahnybok himself has used violence together with Miroshnychenko, as can be seen on the photo (right) taken in the Kiev parliament. A year ago, Miroshnychenko had made himself a name, when insulting Ukrainian actress, Mila Kunis he referred to her as "Jew."

While its fascist character becomes more evident, from one day to the next, the Svoboda Party has undergone quite a surprising rhetorical carrier in leading German media organs. Whereas, in the fall of 2013, there was a basic consensus that the party was rightwing extremist, it has since gone through a major transformation. As a dwindling number of editorial boards is characterizing Svoboda as "fascist" or "rightwing extremist," a growing number is using such attributes as "rightwing populist," "nationalist," or also, more recently, "national conservative." Just a few days ago, a German daily wrote that Svoboda, possibly "before 2004, had nurtured rightwing extremist traditions." However, its leader Oleh Tiahnybok has since "led the party out of this rightwing quagmire." It would be "difficult to find fascist or anti-Semitic remarks he [Tiahnybok, (editor's note)] has made over the past few years," according to the "Tagesspiegel." Besides, the "fascism accusation" is part "of the typical Russian propaganda."[4]

If one would take this allegation seriously, various Svoboda activities under Tiahnybok's leadership in 2013 would no longer be considered "fascist" or "rightwing extremist." This would include a neo-Nazi "Svenskarnas Party" (Party of the Swedes) meeting, March 23 - 24 2013 in Stockholm, where Svoboda was represented and one of the keynote speakers was from the German NPD party. There would also be Svoboda's participation at the "Boreal Festival" in mid-September 2013 in Cantù, Italy, where, alongside the "Svenskarnas Party," also Italy's neo-fascist "Forza-Nuova" and the "British National Party" were also present, or a meeting of a Svoboda party delegation with Saxony's NPD regional parliamentary group in late May.[5] The April 28, 2013, commemoration celebration organized by Svoboda in Lviv for the 70th Anniversary of the founding of the "Galician" SS Division, with a Svoboda parliamentarian in Kiev as keynote speaker, would have nothing at all to do with fascism. The next day, Tiahnybok met in Kiev with the German ambassador.[6] According to the "Tagesspiegel's" allegations, Svoboda's memorial celebration in October 2013 of the October 14, 1942 founding of the "Ukrainian Insurgent Army" (UPA) would also not qualify as fascist. The UPA had massacred around 100,000 people in the wake of the Nazi occupiers, particularly Jews.

The German government claims that "in the run-up to the 2012 parliamentary elections" Svoboda had revised its electoral program eliminating "rightwing extremist statements" and insisting that, in his telephone conversation with Tiahnybok on April 29, the German ambassador had underlined that "anti-Semitic remarks are unacceptable from the German viewpoint."[7] But Svoboda's program is still unambiguous. For example, the party demands that all media organs spreading "anti-Ukrainian propaganda" have their licenses revoked. The parliamentarian Ihor Miroshnychenko used precisely this argument to justify his attack on NTU's director. According to its electoral program, Svoboda seeks to outlaw "any display of Ukrainophobia" and ban "sexual perversion" - referring also to homosexuality. The party calls for a "state program of patriotic education and hardening the nature of the young generation" and promotes "patriotic organizations." "Patriotism" would be defined by Svoboda's view of history: It plans to declare the crimes of the Nazi UPA and of the Organization of Ukrainian Nationalist (OUN) collaborators a "national liberation struggle" and wants to give UPA veterans "proper privileges," and declare October 14, the day the UPA was founded, a "national holiday" - the "Day of Ukrainian Weaponry."[8]

"Gone Wrong More than Once"

When on February 20, the German Foreign Minister Frank-Walter Steinmeier (SPD) appeared in public at the side of Svoboda leader Oleh Tiahnybok, he lent that party social respectability as an acceptable cooperation partner. (german-foreign-policy.com reported.[9]) A few days ago, former EU-Commissioner, Günter Verheugen (SPD), was unambiguous in his views concerning Svoboda. It is a fatal "violation of a taboo" to accept "real fascists in a government," Verheugen declared: "Integrating radical forces, has gone terribly wrong more than once in European history. This should not be forgotten."[10]

More reports and background information on the current German policy in reference to the Ukraine can be found here: Problems of Eastward Expansion, A Broad-Based Anti-Russian Alliance, Expansive Ambitions, Our Man in Kiev, Integration Rivalry with Moscow, On the Offensive, At all Costs, The Crimean Conflict, The Kiev Escalation Strategy, Cold War Images and The Free World. 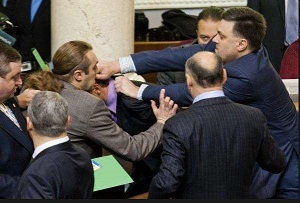