BERLIN/KIEV (Own report) - German military circles are debating NATO's continued eastward expansion and the partitioning of the Ukraine. As a former advisor in the Amt für Studien und Übungen (Bureau for Research and Training) of the German Bundeswehr writes, the question of expanding the western war alliance to the territory of the Ukraine is still on the table. If this step is taken, "probably only the western Ukraine" will join NATO. The "eastern Ukraine" would "in this case, become independent or a de facto nation like Abkhazia." The author, a lieutenant colonel of the reserves, presented his ideas in a military magazine, embedding them in a retrospective on the entire past twenty years of NATO's eastward expansion. According to the author, a "cordon sanitaire" separating this war alliance from Russia, conceded by the allies of World War II to the Soviet Union, has, for the most part, been absorbed into NATO, essentially crossing every "red line" drawn by Moscow. According to the author, Russia finds itself on a historical defensive. Only Moscow's 1989 project of winning security for itself through an axis with Berlin, has a chance of succeeding, says the author.

The author, Heinz Brill, whose analysis was published recently in an Austrian military journal,[1] begins his paper with a retrospective on NATO's early eastward expansion in 1990. Brill, who worked for many years as director of research in the Central Research and Study section of the Bureau for Research and Training of the Bundeswehr, recalls, that the Soviet Union had only agreed to the annexation of the German Democratic Republic by the Federal Republic of Germany under the condition that the five new federal lands of East Germany not be used by NATO. "Our position was of a long-term perspective" writes the Soviet President at the time, Mikhail Gorbachev in his memoirs. The countries lying between the now larger Germany and Russia, should remain neutral, forming a "cordon sanitaire", a security zone between Russia and the west.[2] According to Brill, in light of a "strategic position, which presupposed a stable and irreversible cooperation between the Soviet Union and Germany," NATO's territorial expansion to the GDR seemed acceptable to Moscow.

Brill describes how, in violation of the 1990 accords, the west expanded step by step eastward. With NATO's second eastward expansion in 1999 (Czech Republic, Hungary, Poland) and its third in 2004 (Bulgaria, Estonia, Latvia, Lithuania, Rumania, Slovakia and Slovenia), the East European "cordon sanitaire" melted away almost completely. Since then, according to Brill, "safeguarding the remaining - or new East European 'cordon sanitaire'" (Belarus, the Ukraine, Russia's exclave, Kaliningrad and "a few Caucasus republics"), has become Moscow's "absolute priority." After all, with NATO's 2004 expansion, the "Baltic Sea and the Black Sea have become NATO maritime regions" as well as "all of the 'red lines' (...) have been crossed by the West." All in all, "a turning point has been imposed on [Russia's] nearly 300 year policy of westward and southward expansion" which "has been part of the basis of Russian state doctrine since Peter the Great."

Brill credits Germany with the first impulse for NATO's eastward expansion. In March 1993, Bonn's Minister of Defense at the time, Volker Ruehe, was the first to publicly declare that the war alliance should be expanded to include several East European nations, says Brill. At the time, Washington reacted very skeptically to the German proposal. The policy of eastward expansion was "Made in Germany". Over the ensuing years, the US has adapted its strategy accordingly. Today, according to the Lt. Col. of the reserves, a continued NATO eastward expansion has become "part of the US global strategy in the struggle for Eurasia", which, on the other hand, has also led to friction with Berlin. Differences of opinion first became public at the NATO summit in Bucharest in 2008, Brill explains. The USA had campaigned for an eastward expansion to include the Ukraine and Georgia, but was defeated because of Germany. Berlin believes, in the meantime, that through a mediator role between Moscow and Washington it can have more influence, an assessment that seems to have been borne out in the Russia-Georgia war in August 2008. Brill sees this war as a "test case" for the collision of the two spheres of influence. Moscow proved that it is not going to accept every violation of its "red line."

Brill is openly comparing the conflict between Russia and the West to the “Great Game” conflict in the late 19th and early 20th century between Great Britain and Russia. Today the focus is particularly on “the oil fields in the Caspian region and secure transport routes.”

The conflict was in no way terminated with the August 2008 war. Ukraine joining NATO is still in discussion, according to Brill. But „most likely only Western Ukraine would join,“ declared the ex-Bundeswehr expert, hinting at a possible partition of the Ukraine. He continued: ”in this case Eastern Ukraine would become independent or a de facto nation like Abkhazia.” The Austrian military magazine is supporting this concept by publishing a map that shows a “possible East-West division of the Ukraine in the case of a NATO accession.” But this map is different from those usually presented with a border being drawn between the country’s Russian speaking East and the Ukrainian speaking West, with Oblast Kirovohrad, Mykolyaiv and Odessa within the Russian sphere of influence. But Brill is claiming that all territories up to the Dnieper - including the important oil harbor cities of Odessa and Cherson - would belong to the West. (Click here for the enlarged map showing the partition plans.)

Odessa, with its harbor, is in fact part of the so called Euro-Asian transport corridor that the EU would like to use to transport oil from the Caspian Basin to the West. Cherson and Jushny are also situated to the west of the Dnieper - and therefore inside Brill’s “Western Ukraine”. Jushny’s oil harbor is being used to transport Georgian oil across the Black Sea to Western Europe, circumventing Russian territory. There is also an oil harbor in Cherson with a direct link to the Odessa-Brody pipeline, transporting oil from the Black Sea all the way to the Polish border. If, as in Brill’s model, the Ukraine would be partitioned along the Dnieper, all important oil harbors and the most important pipeline routes of this East European country would come under western control. This clearly highlights the material background of the partition plans of this nation. 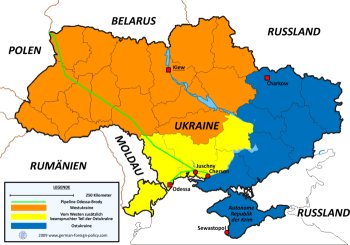