PRAGUE/WASRSZAWA/PARIS/BERLIN (Own Report) - The initiative "Eleven Thousand Children" reported that survivors of the "Reichsbahn" (Railway) deportations into the concentration camps of the NS-regime wanted to conduct juridical steps against the current board of the German Railway Enterprise "Deutsche Bahn AG". The victims of the deportation, among them the eleven thousand children from France and several millions from occupied areas, had to pay four "Reichs"pennies per kilometer for their deportation on the German railway net; for children two pennies were charged each. The German "Reich" collected the fees among others from the Jewish communities of the deported people and distributed millions of "Reichsmark" to the German "Reichsbahn". From the operational capital stock and the resulting interest rates all "Reichsbahn"-successors took their profits. Even today the German Railway Association benefits from the deportation money, however refuses to remember of the victims of the crimes through nation-wide exhibitions. After first complaints from Prague, which were directed against the board of the German Railway Association, the Initiative "Eleven Thousand Children" calls the survivors of the "Reichsbahn" crimes in all European states, to notify their respective cases of deportation and prepare it for an international lawsuit. "After the people, the "Reichsbahn" shifted goods and chattels of the deported ones in ten thousand waggon loads through the whole continent," reports Prof. Dr. Wolfgang Dreßen. "Hereby fortunes of many millions were stolen, which have never been returned."

After the recent protest the Berlin Railway Board disclosed the ultimate rejection of the memorial of the deported ones by an exhibition at German public railway stations.[1] Respective demands were postulated on January 27th and 28th by more than one thousand demonstrations in eleven German cities.[2] The cities Stuttgart, Saarbrücken and Cologne where the focus of the protests. Demonstrations have been conducted for one year also in Frankfurt am Main, Weimar and Leipzig.[3] As it is said in the German press, the board of the enterprise "gruffly" rejects all mitigation efforts and even ignores the requests of concerned politicians.[4] In Weimar the Chief Mayor urged the enterprise, to fulfil its historical obligation - however, in vain.

"After the anew rejection of the protests indignant survivors from abroad expressed their deepest dismay, as the press spokesman of the initiative "Eleven Thousand Children", Tatjana Engel reports. "Survivors and their relatives are filled with bitterness. It hurts them, that all pleas, requests and peaceful demonstrations are ignored by the board of the enterprise. The private initiative, which advocates for the memorial of the 11.000 children and cooperates with Beate Klarsfeld of the Paris organisation "Fils et Filles des Déportés Juifs de France" (FFDJF), were advised to undertake juristic steps.

Also Mrs. Klarsfeld does no more see any chances for a dialogue with the political group, that is attributed to be affiliated to chairman Mehdorn.[5] This would be the "end of all diplomacy", judges Mrs. Klarsfeld [6], whose Paris organisation was allowed to remind of the deported Jewish children at 18 French railway stations, however was dejected in the land of perpetrators. Also one group has to struggle for a remembrance, which inaugurated a memorial of the artist Günter Demnig on January 28th at the main station of Cologne. The inscription sculpture ("Many officers, workers and employees of the German Railway were involved into the deportation of millions of people during the times of the German National Socialism") is also threatened by deportation by urban authorities.[7]

In the face of the German amnesia, the German initiative, which several professors, historicians and journalists belong to, now started with proving juridicial Stepps against the "Bahn AG" and ist owners, of which the Federal Ministry for Traffic, Construction and Urban Development is in charge of. Foreign and internal requests to care for an appropriate memorial on German railway stations, are not responded by the office or rejected due to an allegedly missing responsibility. "The Ministry also did not react on our letter from January 17th of this year", the press spokesman of the Initiative "Eleven Thousand Children" reports. The group therefore calls all survivors of the "Reichsbahn"-deportations as well as their relatives, to respond to a questionnaire with the data on the deportations. Information is especially requested, which is relevant for the calculation of the gains from the deporation and the realized share of the crimes. The questionnaire is distributed via Internet.[8]

Prof. Dr. Wolfgang Dressen concretely described the extent of the profits made from the deportations from the precedent enterprise of the current German Bahn in an interview. According to this, the "Reichsbahn" not only channelled these millions of people through Europe to their various camps of labour and destruction - this was done under respective gains. After the contributions to the murders were completed, the "Reichsbahn" made its logicstic system available for further crimes - the transportation of the properties of the deported ones to Germany. Here the robbed items ("Jewish chattels") were either shifted to the NS-leaders or publicly auctioned off. Just from France only the "Reichsbahn" delivered 29.400 waggons with belongings of the deported ones to Germany. "These were 735 train loads with 40 waggon units each", reports Mr. Dreßen. "These were taken from 69.000 French apartments. Now extrapolate the sum, which will occur if you include the Netherlands, Belgium, Denmark, Chekoslovakia, Poland and the other occupied states - this is an elusive logistic of robbery, which never has really been evaluated up to now."

The questionnaire you can find here. 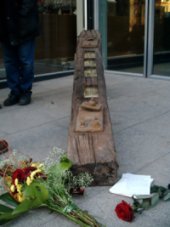