BARCELONA/BERLIN (Own report) - Just days before regional elections in Spain's Catalonia - elections declared a plebiscite on secession - a political partner of the German Green Party is calling for the rapid secession of that region from Spain. Ethnically defined "peoples" throughout Europe should have the "right to self-determination," recognizing "no borders," according to a declaration signed by the Spanish member organization of the "European Free Alliance" (EFA). The EFA unites separatist parties of various political orientations from numerous EU member countries. These include organizations closely connected to Viktor Orbán's ruling Fidesz Party, in Hungary, conservative Flemish nationalists and a party in the tradition of northern Italian separatists, who, years ago, had used terrorism as a means of imposing South Tyrol's absorption into Austria. Both, the EFA and the German Green Party are members of the same parliamentary caucus collective in the European Parliament. EFA subsidiaries disseminate a map of European so-called nations without states, depicting, for example, Catalonia as independent of Spain and merged with other territories in Spain and France to constitute a "Greater Catalonia." Leading politicians in the current campaign for Catalonian separatism are propagating pan-Catalonian views, which opponents sharply criticize as "cultural racism with an expansionist demeanor." The EFA's map of Europe also depicts Germany merged with Austria and territories of neighboring countries to form a Greater Germany.

Elections as a Plebiscite

Just a few days before Sunday's elections in the Spanish region of Catalonia, opinion polls predict that the secessionist forces are in the lead. According to the polls, the separatist alliance "Junts pel Sí" ("Together for the Yes") can expect 66 or 67 seats in the regional parliament. The fact that other advocates of secession will also win seats in parliament, the faction opposing Catalonia continuing to be a part of Spain could easily win an absolute majority - 68 seats. Junts pel Sí brings left and rightwing parties together, whose leaders - according to one observer - "have about as much in common as Germany's arch-conservative Horst Seehofer and the leftist Sahra Wagenknecht."[1]. Their only common denominator is Catalonia’s secession from Spain. Junts pel Sí has announced that should it win an absolute majority of parliamentary seats, it would initiate the secession process, thereby, turning the elections into a sort of informal referendum on the issue of secession. The Spanish Constitution does not foresee a unilateral declaration of regional secession. The government in Madrid rejects the question of secession. Serious upheavals can be expected, should Barcelona insist on seceding. It is not only possible that an eventual Catalonian nation, not being an EU member, may therefore have to abandon the Euro, but, Catalonia - the Spanish region second only to Madrid in prosperity - would no longer contribute its share to the common well-being of the country, thereby condemning poorer regions to sink further into poverty.

Catalonian Minister of Justice Germà Gordó, recently poured more oil on the already fiery debate. In his lecture at the annual Catalonian Summer University in Prades (Southern France), Gordó made reference to an old ethnic-chauvinistic differentiation between ethnic-defined "nations" and territorially defined "states," admonishing that "the construction of a state should not permit the entire nation to be forgotten." This statement was referring to the Catalan-speaking sectors of populations in various regions of Spain as well as in southern France. "Greater Catalonia" would include, other than the current region of Catalonia, not only the Balearic Islands but regions of Valencia and Aragón, as well as regions in France ("North Catalonia"), as the minister of justice was quoted. Once the Catalonian state is founded, these "Catalans" would be issued Catalonian identity papers.[2] Gordó's proposition has provoked massive criticism, not only in Valencia and Aragón, but also from opponents of secession in Catalonia itself. "Catalanism, nationalism and secessionism" have now become "pan-Catalanism," a "cultural racism with expansionist demeanor, which is growing more prevalent," warns Antonio Robles, professor of philosophy at the University of Barcelona.[3]

Nations without a State

One of the organizations closely cooperating with the German Green Party in the European Parliament has for years backed Pan-Catalanian views. The European Free Alliance (EFA) - an alliance of numerous parties from EU member countries, representing linguistic minorities and groups of dialects - is calling for the "right of self-determination" for ethnically defined minorities throughout Europe.

They have been disseminating a map of Europe [4], showing "nations without a state." Poland, for example, is significantly reduced having lost the region populated by the "nation" of the Kashubians, as well as Silesia. France, for example, must do without Brittany ("Breton nation"), its southern region ("Occitania") and Alsace. Spain loses not only Catalonia, but also Andalusia, Galicia, the Basque Country and several other regions. Catalonia, on the other hand, is fused with the region of Valencia and some of southern France, and includes the Balearic Islands ("Països Catalans").The largest "nation without a state" is Germany, according to the map, merging with Austria, Luxembourg, the Northern Italian province South Tyrol and the German-speaking regions of Switzerland. (The illustration is an excerpt of the European map published by the EFA youth organization.)

EFA - whose subsidiaries have been disseminating a map, presenting a continent with a preponderant Greater Germany - is a member of a parliamentary caucus collective in the European Parliament that includes the Green Party of Germany. Seven politicians represent EFA. The presidium of the parliamentary collective also includes Rebecca Harms (German Green Party), who is one of the two chairpersons as well as two EFA functionaries. The first deputy chairperson is a member of "Esquerra Republicana de Catalunya" ("Junts pel Sí"). A few days ago, Spanish EFA members published a declaration in favor of Catalonia’s statehood. They also declared they would struggle for "a new Europe" that recognizes its - obviously ethnic defined - "peoples' right to self-determination" and "no borders."[5]

EFA's member parties represent political orientations ranging from the left to the ultra-right. It includes parties, whose aspirations for autonomy and secession are shared, in the meantime, by significant portions of the population of their respective countries, which has on occasions led to international tensions. In addition to the Esquerra Republicana de Catalunya (ERC), EFA includes the "Scottish National Party" (SNP), for example, which September 18, 2014, won 44,7 percent in the referendum on Scotland's secession. The conservative Flemish EFA member Nieuw-Vlaamse Alliantie" (N-VA), under the leadership of Bart de Wever, is fighting for Flanders' secession from Belgium.[6] The EFA members representing Slovakia's and Rumania's Hungarian speaking minorities "Magyar Kereszténydemokrata Szövetség" and "Erdélyi Magyar Neppart" respectively, are closely associated with the Hungarian Prime Minister Viktor Orbán's ruling party "Fidesz." Partisans of EFA member "Erdélyi Magyar Neppart" lavish praise on the Hungarian Nazi collaborator József Nyirő [7] and campaign for a "Greater Hungary."[8] EFA member "South Tyrolean Freedom" is calling for South Tyrol's secession from Italy. The party sees itself in the tradition of so-called South Tyrolean freedom fighters, who, since the 1950s, had carried out bomb attacks to force South Tyrol's absorption into Austria. The Federal Republic of Germany was one of their supporters.[9] Even in France, EFA member parties such as "Unser Land" (Alsace) and the" Union Démocratique Bretonne" (Brittany), which are demanding more autonomy from the French state, are gaining strength. The same applies to the Polish EFA member "Ruch Autonomii Slaska".

Catalan secessionist success in next Sunday's elections would give a boost to European ethnic separatisms, represented by the German Green Party's partner organization, EFA. All major EU countries, France, Great Britain, Italy, Spain, Poland would be affected - all, except Germany. In terms of power policy, Germany would profit from this development - unless an uncontrolled escalation can be prevented. This cannot be taken for granted, when looking at the various cases of national disintegration that have been taking place in Europe over the past twenty-five years. 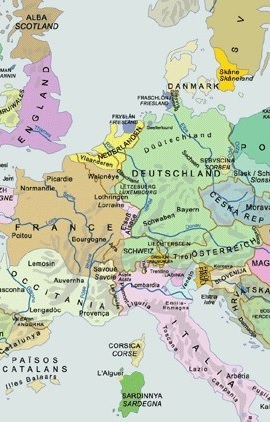