A Relaxed and Comfortable Putsch

BANGKOK/BERLIN (Own report) - Following last weekend's bloodbath, the government in Thailand - led by long-time partners of the German Friedrich Naumann Foundation (FDP) - is threatening to continue its use of military force against mass protests in Bangkok. As observers note, the escalating confrontation between demonstrators demanding new elections and the army is bringing Thailand "to the brink of civil war". The country's old elite - made up of the military, big industry and the royal dynasty - fear that the growing democratic movement will restrict their predominance. Some in the old elite, particularly the Democrat Party of Prime Minister Abhisit Vejjajiva, have for years already been cooperating with the Friedrich Naumann Foundation. Alone since Mai 14, they are responsible for the deaths of at least 36 protesters. The Naumann Foundation had shown sympathy toward a putsch by the traditional elite in 2006 and the subsequent, heavily contested outlawing of a popular party, because "it could not have been done democratically". The assistant, who was responsible for the Naumann Foundation's activities at the time and for the support of the traditional elites from 2007 to 2009, is today head of the Asia department in the German Ministry for Development.

In the aftermath of the Thai military's bloody attacks on the massive protests, accounting for 36 deaths [1] since May 14, the situation in the Thai capital is threatening to escalate. Observers expect that the soldiers will renew their attacks and consider Thailand to be "on the brink of civil war."[2] 25 people have already been killed - some by snipers - in April.[3] Yesterday, one of the leaders of the protest demonstrations died of wounds he sustained last Thursday. A sniper shot him in the head, while he was being interviewed by a New York Times reporter.

This escalating conflict derives from Thailand's old elite's fear of a loss of their ruling power. This elite is made up of the military, big industry and the monarchy. Up to the putsch in 2006, the Prime Minister at the time, Thaksin Shinawatra, had, at times governed contrary of the interests of this old elite, but because he had fulfilled the wishes of the impoverished greater portion of the population, he could always win the elections. The military and the Democrat Party, put in power by the military, have not been able to silence the demands for democratization, which have been growing stronger since Thaksin's overthrow. With their protests, which are spreading from Bangkok to other regions of Thailand, the "red shirts" are primarily demanding the resignation of the Abhisisit (Democrat Party) government and new elections.[4] The Abhisit government was put into power in December 2008, above all through military pressure.

The Friedrich Naumann Foundation (affiliated with the German Free Democratic Party - FDP) had taken the side of the establishment and the putschists in this conflict between Thailand's traditional elite and the growing democracy movement already years ago. This has become clear also through the foundation's position statements about the elite's military putsch in September 2006, to insure its maintaining power. Immediately following the putsch against Thaksin, one associate of the Naumann Foundation declared from Thailand that she does "not feel endangered" by the soldiers patrolling the streets of Bangkok, "from the way they are behaving, they are more there to show presence than to fight anyone."[5] "If this is supposed to be a coup d'état" it is a "relaxed and comfortable" putsch. Television stations are even showing people offering "flowers to the soldiers." "Can the population's positive attitude be taken as a legitimation of the military putsch?" the foundation's associate asked. "As a political scientist" she must "say that a military putsch is undemocratic," but the country, under overthrown President Thaksin's rule "had not been more democratic than it is now." Thaksin had won the last election with a clear majority.

Showing a similar amount of understanding, the Naumann Foundation supported, at the end of 2008, the old elite's successful efforts to again overthrow Thaksin's supporters, who had come to power through elections. Thaksin's and his supporter's policies have "in fact bettered the situation of the impoverished population" writes the foundation. Since Thaksin's party therefore "has great popularity" in the population, it was "democratically impossible to drive it from office." The traditional elite had recognized this and made the country ungovernable by occupying the parliament and the airports. It was eventually possible to bring the old establishment back to power, with the help of the justice system, which had outlawed the party of Thaksin's supporters, reported the Naumann Foundation, shortly after Prime Minister Abhisit Vejjajiva took office in December 2008.[6] Abhisit's Democrat Party, which came to power with military help, is a "long-time partner of the Friedrich Naumann Foundation for Freedom."

Following Abhisit's taking office, the Friedrich Naumann Foundation continued its support for the Democrat Party - which had now come to power - with the obvious objective of securing that party's position. The foundation's advisors and the FDP, the foundation's mother party, counseled activists of the Democrat Party in how to use party activities to build ties to the population and how "political strategies and strategies for political youth organizations" can be successfully applied.[7] At the end of 2009, along with high-ranking advisors of the Democrat Party, including Foreign Minister Kasis Piromya, advisors of the Naumann Foundation made an evaluation of their previous cooperation and discussed future cooperation. The German ambassador to Thailand was also in attendance at this "Annual Meeting with Partners and Friends". At the end of March 2010, though the demonstrations were already taking place, Wolfgang Gerhardt, Chairman of the Naumann Foundation, was in Bangkok for talks with the leading politicians of the Democrat Party.[8] On April 7, just a few days before Abhisit's government sent its military snipers against the peaceful demonstrators, a delegation of the Friedrich Naumann Foundation was unexpectedly forced to interrupt their meeting in the Thai parliament - protest demonstrators had forced their way into the building.

activities in Thailand. From 2007 - 2009, this section was headed by Harald Klein, who just a few weeks after becoming section director in 2007, visited Thailand to learn first-hand about the foundation's activities. Klein spoke also to Abhisit, who, at that time, had not yet become prime minister, but was already chairman of the Democrat Party, and he was debriefed on the foundation's projects. A photo published on the internet by the Naumann Foundation, shows an advisor in the course of Klein's debriefing on the "Thailand Project". On the screen depicting the project, one can read the allegation that a "coup d'état is a necessary evil" - supposedly in a "democratization process". (Here a segment of the photo.[9])

Since the beginning of this year, Harald Klein, to whom, at that time, this allegation had been expressed, has become section director in the Ministry for Economic Cooperation and Development under the FDP Minister Dirk Niebel.[10] He is responsible for "Asia/Latin America" and "questions of principle."

Further information on Friedrich Naumann Foundation can be found at: The Olympic Torch Relay Campaign, Operations against China, Neoliberal Networking, The Naumann Caucus and Friends of the Monarchy. 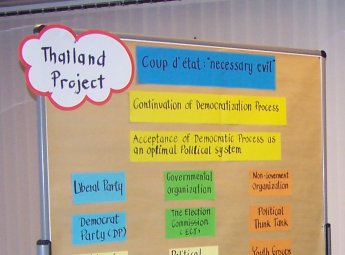