BARCELONA/BERLIN (Own report) - Catalonian secessionists are progressing toward the ethnic dismantlement of Spain with referendums to be held in 161 cities and communities. Scheduled for mid-December, referendums will be held in one-sixth of Catalonia's municipalities on a - non-binding for now - resolution on secession from Spain and the founding an independent country. Secessionists in other parts of the country - the Basque Region and Galicia - are carefully watching what happens. The referendums are providing new impetus to the German strategy of restructuring Europe along ethnic lines. The Federal Republic of Germany provided Catalonian secessionism relevant support over the past few years, most recently, two years ago in the framework of the Frankfurt Book Fair. Berlin's foreign policy front organizations have long since catalogued the Catalan as a "Volksgruppe" (an ethnic entity) justifying eligibility to special rights. Catalan secessionists are being spoken of in the same breath as other ethnic minorities demanding similar autonomous rights, including the Bretons in France and the Welsh in Great Britain.

Referendums will be held December 13 in 161 of the 900 Catalan municipalities and communities, to determine whether Catalonia should secede from Spain. The referendum is not yet binding. They exclude the largest regional cities (Barcelona, Lerida and Tarragona). A response is sought to the question: "Are you in favor of the Catalan nation being an independent, democratic and social welfare nation in a European Union of peoples?"[1] The referendum was initiated by an organization calling itself "I'm Catalan. I Love Freedom." The referendum is being flanked by an effective PR campaign, which included the chairman of the secessionist party, Esquerra Republicana de Catalunya recently hoisting the Catalan secessionist flag on the highest mountain peak in the region. The secessionists are also trying to internationalize their cause. They have applied in the European Parliament for concrete steps toward independence and are seeking international observers for the December 13 referendum, particularly observers from the OSCE and the UN.

A Spanish Constitutional Court decision relevant to the secessionist plans is expected within the close timeframe of the referendum. Three years ago the regional parliament in Barcelona passed new autonomy statutes, declaring extensive special rights for Catalonia. There is not only controversy about the stipulation of autonomy status, that Catalonia is an independent "nation" and the claim that Catalonia deserves historical privileges. Most controversial is the obligation that all residents of the region learn Catalan. Since some time, this has led, to barricading tendencies. Two years ago, philosopher and regional parliamentarian in Barcelona, Antonio Robles complained to german-foreign-policy.com, that "if one was not fluent in Catalan, (...) it was very difficult to work in the Catalan communication industry" - a massive disadvantage to the citizens from other regions of Spain.[2] If the Constitutional Court rules the regulations in the Autonomy Statutes - which codifies this discriminatory development - unconstitutional, massive protests are expected.

Germany, the EU trail-blazer of ethnic privileges and secession,[3] is no innocent bystander in these developments in Catalonia. Since the late 1980s, the German land Baden Wuerttemberg has maintained a "regional partnership" with Catalonia and two other regions (Lombardy in Italy and the Rhone-Alps region of France). This "regional partnership" brings this

northeastern Spanish secessionist region economic advantages, strengthening it in relationship to other regions of Spain.[4] The separatists are politically supported also by the German Green Party. The Greens are members of the same European parliamentary caucus as the "European Free Alliance", which includes several proponents of Catalan secession as well as other separatists.[5] The "European Free Alliance" is not only supporting the secession of Catalonia, for years it has been campaigning with a map with completely new European borders: Spain is divided into seven new countries, Germany has annexed Austria, parts of Switzerland and Northern Italy (South Tyrol). The territory of France is half its current size. According to the map of the friends of the German Greens, the Bretagne, as well as the entire south of the country, the fictive "Occitan" have seceded. The map instigates diverse secessionist movements throughout Europe and is published in full knowledge of the Yugoslav wars of disintegration. German-foreign-policy.com documents excerpts here.

Germany had created a new impulse for Catalan secessionists at the Frankfurt Book Fair, in the fall of 2007. Usually a country is chosen as "partner nation," to be intensively promoted at the book fair. But this time it chose Catalonia, a region,

seeking to become a nation. But not all Catalan writers were to be honored at that book fair, only those, whose works were written in Catalan. Authors using the national Castilian Spanish, were strictly excluded. A map showing a "Catalonia" nation, extending from the Spanish coastline north of Valencia to southern France (Perpignan), incorporating both the Balearic Islands as well as Andorra,[6] was distributed at the book fair. The president of the Balearic regional government announced, also at this book fair, that his Islands would intensify their cultural cooperation with the Catalan region - an agreement providing further impetus toward separatism.[7] These activities take on greater significance through the fact that the German foreign ministry is an official partner of the Frankfurt Book Fair. The main European power's toleration of their activities was an important symbol for the secessionists in Catalonia. (The excerpt of the map is also taken from the map published by the "European Free Alliance.")

Front organizations of Berlin's foreign policy have long since catalogued the Catalans as a separate "ethnic entity," justifying eligibility to special rights. The Federal Union of European Nationalities (FUEN) speaks of the Catalans in the same breath as not only the Basques but also the Bretons in France or the Scottish and the Welsh in Great Britain.[8] The ethnic subdivision of Europe, as is supported in Germany, lays the foundation not only for demands for autonomy but also for secessionist aspirations, such as are currently escalating in Catalonia. This ultimately weakens the nation-states competing with Germany for influence in Europe. 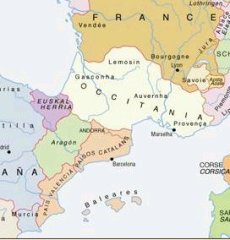