The German Ethnic Model (I)

BUDAPEST/BERLIN (Own report) - Hungarian rightwing extremists are preparing a resolution to the European Parliament to revise the Beneš Decrees and are demanding German parliamentarians to support them in this effort. The resolution is initiated by a member of the Jobbik Party, who was recently elected to the European Parliament. The Jobbik Party has won 15 Percent of the votes in Hungary. Numerous German politicians support this demand to annul the Beneš Decrees because Hungary and Germany share common ethnic political concepts legitimizing claims against neighboring countries. For years, Budapest has invoked the ethnic "right of blood" ("ius sanguinis"), adapted by Germany, co-opting Slovak and Rumanian citizens ("Hungarians abroad"), thereby escalating international tensions. Since the economic crisis began, rightwing extremists have enhanced their electoral successes in Hungary by accentuating ethnic chauvinist policy. According to recent opinion polls, nearly half of the Hungarian population approve of the fact that their country will also be represented in Brussels by three rightwing extremists. Their organizations are appealing to Berlin, to support their ethnic radicalization.

A member of the Hungarian rightwing extremist Jobbik Party, who was recently elected to the European Parliament, announced that he will submit a resolution to the European Parliament to annul the Beneš Decrees and is explicitly seeking the support of German parliamentarians. In the past, German politicians have repeatedly come forward with demands for the annulment of Czechoslovakia's Beneš Decrees. The West German government has always insisted on its legal standpoint, claiming that these decrees are in contradiction with international norms.[1] Jobbik is now trying to take up the cause, having entered the EU Parliament with 14.8 percent of the Hungarian votes in June’s EU Parliamentary elections. But, the campaign against the Beneš Decrees, which, in the aftermath of World War II, were directed against German and Hungarian Nazi criminals and profiteers, is, for Jobbik, only a first step. Other far-reaching demands are to follow. This organization's main objective is to have "the Trianon borders "revised "within a few generations or as soon as possible."[2] The Trianon Treaty of 1920, which set Hungary's borders following WWI, obliged Budapest to relinquish sectors of its territory to neighboring countries. Jobbik would like to get these back into Hungary.

Jobbik's demands are based on ethnic political concepts, represented in the

EU mainly by Germany. According to these concepts, a state has a right to the creation of close bonds with its "blood relative" minorities ("Volksgruppen" ethnic minorities) in neighboring countries. Under this concept Berlin has accorded not only special attention to the German-speaking minorities (Germandom) in Poland and the Czech Republic, but has granted German citizenship to several hundreds of thousands Poles and tens of thousands of Czechs, because their ancestors had been German ("ius sanguinis," "right of blood").[3] Budapest applies this same right of blood and treats a half-million Slovaks and 1.3 million Rumanians as "Hungarians abroad," to whom special "assistance" must be granted. To what extent such "assistance" is to be stretched is a matter of controversy. (Our map shows the areas of residence of Hungarian speaking minorities. Here you find an enlargement.)

It is constantly being stretched. Over the past few years, Budapest has been according "Hungarians abroad" a growing number of special rights - always with Berlin's support - that, among other things, would facilitate their becoming Hungarian citizens and strengthen their orientation on Budapest.[4] Simultaneously the Hungarian government is making a case for procuring special collective rights (autonomy) in Slovakia and Rumania for the "Hungarians abroad".[5] Because Bratislava rejects Budapest's ostentatious attempts to interfere, relations particularly between Hungary and Slovakia have been tense for years. New conflicts are now brewing. Hungary's conservative Fidesz Party has announced it is going a step further, and will, on a continuing basis, cooperate in the European Parliament with the Hungarian speaking parliamentarians from Slovakia and Rumania. This step would "overcome Trianon," declared the vice-chairman of the EVP caucus in the European Parliament, Jozef Szajer (Fidesz). This attempt to co-opt Slovak parliamentarians for Greater Hungarian objectives is being greeted with protests in Bratislava.[6]

Further escalations are imminent. According to Szajer, Fidesz will also cooperate with Jobbik to insure Hungary's interests.[7] Jobbik is not only calling for the annexation of regions of Slovakia, Rumania, Serbia and the Ukraine, but takes also for other rightwing extremist positions. The para-military Magyar Gárda (Hungarian Guards) organization, commanded by Jobbik president, Gábor Vona, has become infamous throughout Europe because of its martial attacks against Romanies. Jobbik is also known for its open, aggressive anti-Semitism as well as for the brutality of its party and front organizations against liberals and leftists.[8] The escalation of the economic crisis is driving numerous ethnic chauvinist motivated voters into their arms. According to a recent opinion poll, nearly half of the Hungarian population believes that Jobbik's 14.8% electoral success is "good for Hungary."[9] And only one-third consider the party's open anti-Semitic, racist political standpoints as extremist.

The rightwing extremist accentuation taking place in Hungary, meanwhile being monitored internationally, is based on expansive ethnic presuppositions (ius sanguinis), which that country shares with Germany. Under German hegemony in the EU, this concept has been consistently further developed. Rightwing extremist organizations are now openly appealing to Berlin to join their ethnic radicalization. This is demonstrated by the Jobbik announcement that it would call on German members of the European Parliament to cooperate, as well as by the rally, two months ago, in front of the German embassy in the Castel Quarter in Budapest, where rightwing extremists, including members of the Hungarian Guards yelled "There is no truth in the Holocaust". That building had served from 1936 - 1945 as the embassy of Nazi Germany. In 2001 German diplomats settled in a second time.[10] Berlin resolutely rejects the defiant manner of these Hungarian rightwing extremists. But, as in the interlude between the world wars, the radicalized variation of the German ethnic model is, already in an early phase of the crisis, deeply rooted at the Eastern European periphery. 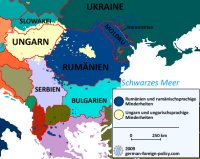