german-foreign-policy.com: North Kivu warlord Laurent Nkunda is the leader of a militia called National Congress for the People's Defense (CNDP). Who are they?

David Barouski: Well, in short, the CNDP and its

military command is a politico-military movement officially formed by General Nkunda in 2006. It is comprised primarily of Tutsi. Its political base is situated in Masisi Territory in the Eastern Congolese Province of North Kivu (see our map), where General Nkunda was born. Several military commanders and CNDP cabinet members are relatives of Gen. Nkunda. The CNDP attracted the Tutsi elements of the RCD and its armed wing the ANC, isolating the Hutu elements led by former Governor Eugene Serufuli.

gfp.com: Waging war costs a lot of money. Where does Nkunda get it from?

Barouski: The CNDP has a parallel government administration. They collect "taxes" and "donations" from the villagers in Masisi, be it in the form of money, livestock, or family members to fight for him. His men also loot heavily in Rutshuru Territory and areas of Masisi Territory in the northern expanse above the village of Mwesso (see our map). Still, it is very difficult to imagine that by doing so they are getting enough to pay for all their military expenses. His men and the Rwandan Army control Virunga Forest in Jomba, Bukima, Bikenge, and near Bunagana to the Rwandan border. According to Wildlife Direct, a man named Kanamaragi, has named himself the CNDP's Minister of the Environment, and Rwandans are allowed to pay him, or rather the CNDP, to be able to tour Virunga in CNDP controlled territory on the border and watch the Mountain Gorillas. Sources in the region claim Mr. Kanamaragi is believed to be Rwandan. I have also heard reports of CNDP members selling various animals on the black market for money.

gfp.com: A UN report documents that Nkunda and his militias have been staying at the Lueshe mine. Is it possible that they exploit the mine illegally to get money?

Barouski: It is theoretically possible, but I no longer think so. It appears that Gen. Nkunda and his men are not actually smuggling from Lueshe themselves. New research I conducted revealed that individuals have apparently paid him to be able to carry the minerals out of the country and mine in territory he controls. This is exactly what had been happening some years ago with the Albers case. He was able to work in North Kivu but he had to pay the militants occupying the territory, in that case, the Rwandan Army and the ANC.

Barouski: Well, on November 20th, amidst a new outburst of fighting in North Kivu from Gen. Nkunda and the Rwandan Defense Forces, the company Somikivu SPRL announced to Bloomberg News that it had made a deal with the Ministry of Mines and was going to restart pyrochlore extraction from Lueshe. Somikivu is 70% owned by the German company Gesellschaft fuer Elektrometallurgie (GfE). They signed the contract with a Russian trader named Conrus, who is going to buy all of Lueshe's output. Somikivu is run by its General Manager, Mr. Modeste (Mode) Makabuza.

Barouski: Mr. Makabuza is not only the managing director of 70% German owned Somikivu. He is a Tutsi from Masisi Territory, and representative of Rwandan interests. It has been reported many times that he is a relative of Rwandan President Paul Kagame. At one point, he had a cassiterite purchasing business in Goma. He also runs Jambo Safari, a large transport company, and was a shareholder in two other transport companies. According to my sources, Mr. Makabuza has a house in Rwanda, he in fact returns to Rwanda every night to sleep at a place which is secure for him. During the 2nd Congo War, he was aligned with the RCD, but when the CNDP was formed, he allied with them and turned on Mr. Serufuli and General Amisi, the current Congolese Chief of Staff. A source in the region claims Mr. Makabuza worked with Gen. Nkunda during the time his men occupied Lueshe.

gfp.com: Mr. Makabuza said he would produce pyrochlore from Lueshe. Do you believe he is smuggling the pyrochlore out of the Congo via Rwanda?

Barouski: If Mr. Makabuza wanted to smuggle pyrochlore via Rwanda he has the resources to do so. One source in the industry claims that he was smuggling some pyrochlore while Gen. Nkunda controlled Lueshe, but I am not 100% convinced of this claim. There are two good reasons why he would not want to do so. Reason number one: Pyrochlore ore is not really as likely to turn a large profit. Since Lueshe is the only site the pyrochlore can be mined, and the pyrochlore in Lueshe is very impure, roughly 2% as I was told, money-wise it would not turn a big a profit. Because it is impure, a lot of it would be needed to have enough actual component minerals worth selling. The ore is heavy and would incur a heavy fuel cost to ship. Also, pyrochlore ore is not worth that much on the market compared to other ores available in the Congo. High-grade cassiterite, copper, or coltan for example.

In addition, because the site has not been used in years, the industrial miner would have to spend investment capital to repair and replace some of the equipment, which would also make it a requirement to hire technical experts. This obviously would delay the startup of the project, and Mr. Makabuza claims he is going to be producing 96 metric tons within a month? Well, his timetable did not happen since that claim was made back in November. GfE and Somikivu have not developed anything on the site, though Gen. Nkunda's men no longer occupy it as of this interview.

One of the richest area of cassiterite in Congo - and in fact in the world - is a territory west of Masisi. It is called Walikale Territory (see our map). There is a large cassiterite mine in Bisie. There, the ore contains not only quality tin but also iron. This compound of tin and iron - Walikale is the only place in the world you can find that. The ore is worth a lot of money. Gen. Nkunda and the Rwandan army twice fought and captured that territory, in late 2004, and late 2005, but were eventually pushed out both times. At the moment, Mode Makabuza and his brother Alexis are reportedly trying to get into Walikale Territory legally so that they can exploit it through the Sapphir Society and Bangandula Mining Group, but they are in competition with Kivu Resources holding company and renegade Congolese soldiers. Officials are reportedly trying to find a compromise to please all parties, which may prove difficult. It is interesting to note, to my knowledge none of the firms I've mentioned involved in North Kivu are on the list of contracts to be reviewed by the Ministry of Mines.

gfp.com: What is the second reason for Mr. Makabuza not to smuggle pyrochlore from Lueshe?

Barouski: Potential buyers in Europe would know that the pyrochlore is coming from the Congo because Lueshe is the only pyrochlore mine in the area and therefore incoming pyrochlore must have been exploited illegaly. It is also known that Somikivu doesn't currently have the right to exploit Lueshe because the Congolese Government in 1999 sold the legal rights to mine Lueshe to Krall Metal Congo, however there are ongoing legal battles over the validity of this agreement. It would be obvious that the pyrochlore must be coming from the Congo because the only other viable places that you can extract pyrochlore from is from a mine in Canada, a mine in Brazil and a small mine in Gabon. The big issue is that the Brazilian and Canadian mines are both owned by the US company Metalurg, usually through a subsidiary, but Metalurg is the end owner. Metalurg also is the owner of GfE, which, as mentioned owns 70% of Somikivu, the company that reportedly signed this new contract to exploit Lueshe.

That means Metalurg has a monopoly on the pyrochlore market and is able to dictate how much supply is available based on how much they mine. They could theoretically hold pyrochlore out of the market to adjust the price if they wanted to. If someone else like Krall would go in and exploit pyrochlore from Lueshe, they would break that monopoly. That's why I have come to believe that the primary reason why Nkunda was in Lueshe and why Mr. Makabuza is now reportedly legally controlling the mine on behalf of Somikivu is to keep other companies off in order to sustain the monopoly for GfE, and through it Somikivu's owner, Metalurg.

gfp.com: But Mr. Makabuza announced he would exploit the mine...

Barouski: Yes, but the profit they would likely make is relatively small due to costs of transporting the ore to a port city, fuel for the transport, and the factors I mentioned earlier. In addition, the floatation plant on the mining site is old and needs a investment for repairs. What they could potentially do is mine a certain amount of pyrochlore dictated by how much Metalurg wants on the market at that given time. The relatively small amount extracted from Lueshe would not be enough to drastically effect the worldwide supply and thus drive the market buying price for Lueshe down but would still be enough to meet the legal requirements of the contract signed with the Congolese Ministry of Mines so as to avoid a contract review and potential sanctions. The deal is good for all involved: Mr. Makabuza will make some money as the General Director and a shareholder at Somikivu. Even if Somikivu does nothing on the Lueshe site he will be paid for his job as the acting General Director to do nothing but ensure no one else can mine on the Lueshe site. Metalurg is happy because via GfE they will continue to have their monopoly on pyrochlore. The deal pleases the Rwandans as well because they will have the potential to profit from the taxes as part of the shipping route to Mombasa, or perhaps Dar es Salaam in light of the tragedy in Kenya, which has affected the export business.

gfp.com: Are other minerals potentially being smuggled?

Barouski: Statistics at the United States Geological Survey and information from my sources show for example that relatively large amounts of tungsten are being exported from Rwanda - amounts that Rwanda is just not known to have in the country as potential reserves. According to the statistics, much of it goes from Rwanda to Austria. This is interesting when you keep in mind that certain Austrian companies state publicly that they are engaged in extracting and/or purchasing tungsten in the Congo. It makes one wonder why the statistics do not match. 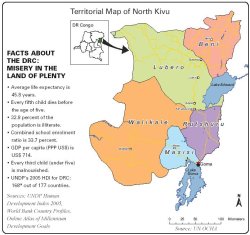